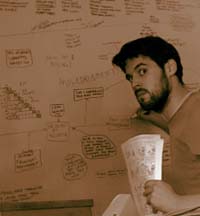 Spacetrawler is a new comic I’ve been working on since around  November, 2008. I played with characters and storylines until early 2009, when i finally nailed them down and began writing scripts for it in earnest. I worked with someone to design 3-D models of my spaceships in the spring, and am currently working with someone else to build the interiors. Sometime in late August I finished writing and thumbnailing almost 1/2 year’s worth of strips. I then had the had help from 3 friends in editing the heck out of it. I just last week finished a new draft, and am already working on tearing that one down. I also have worked over many designs on the characters, and finally feel I am close to knowing what they will look like. Thanks to my webmaster, I have the website now up and going, and I am going to start documenting my work more, as well as figure out how to use ComicPress.

I had hoped to have the strip running by this autumn, but the first week of January is looking more and more likely.