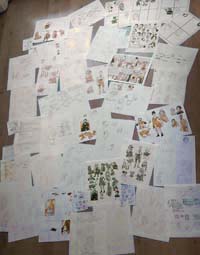 Will I have all that much to show before the strip begins (current guestimate, the first week in January)? Well… likely not. Visually I want it to be a lovely surprise. That said, I will show you here some sketches I did for some interiors (at bottom of this post). Currently I am working with Bob Goff to build the interior for the main spaceship of the comic in 3-D models, so i can do constant quick references for each panel. So, these interiors I’m showing here will bear similarities to what will come, but are far from what you’ll see.

As well as giving you this teaser, over the next couple months I will likely blog here, both jabbering about progress, and perhaps an occasional book review (I’ve been inhaling sci-fi, and loving it). Here’s where I stand and what there is to look forward to.

After receiving edits back from the scripts I had done (from Dylan, Dan, Mike, and Bob, linked to on the right side of this page), I edited them very thoroughly again. Several characters need slight face-lifts, and one needs to be a bit more entirely re-thought. As well, there is a general lack of cohesiveness to the story after the main characters board the ship, and so I am writing an unifying storyline to put in, likely not more than a few strips.

I would like to note here, that my girlfriend, has been a support on all fronts. She’s given me feedback on the writing and art, as well as been tolerant of the long hours I’ve been putting in to get this all done on top of my normal workload, as well as bringing me the occasional chocolates, fueling me with kisses, and reminding me to go for walks. Invaluable.

I have to also finish fleshing out the exact look of the characters, and create character sheets of them from various angles, to keep them consistent. Then I need to start drawing the dang thing.

But it’s been an interesting project. More like writing a novel than the usual daily comic routine I’ve been doing for 15 years. Because I am writing this in chunks, probably about a half year at a time (but will be more determined by when storylines begin and end). And so there is a lot more craft and looking at the big picture. And I’m loving it. 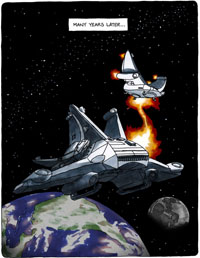