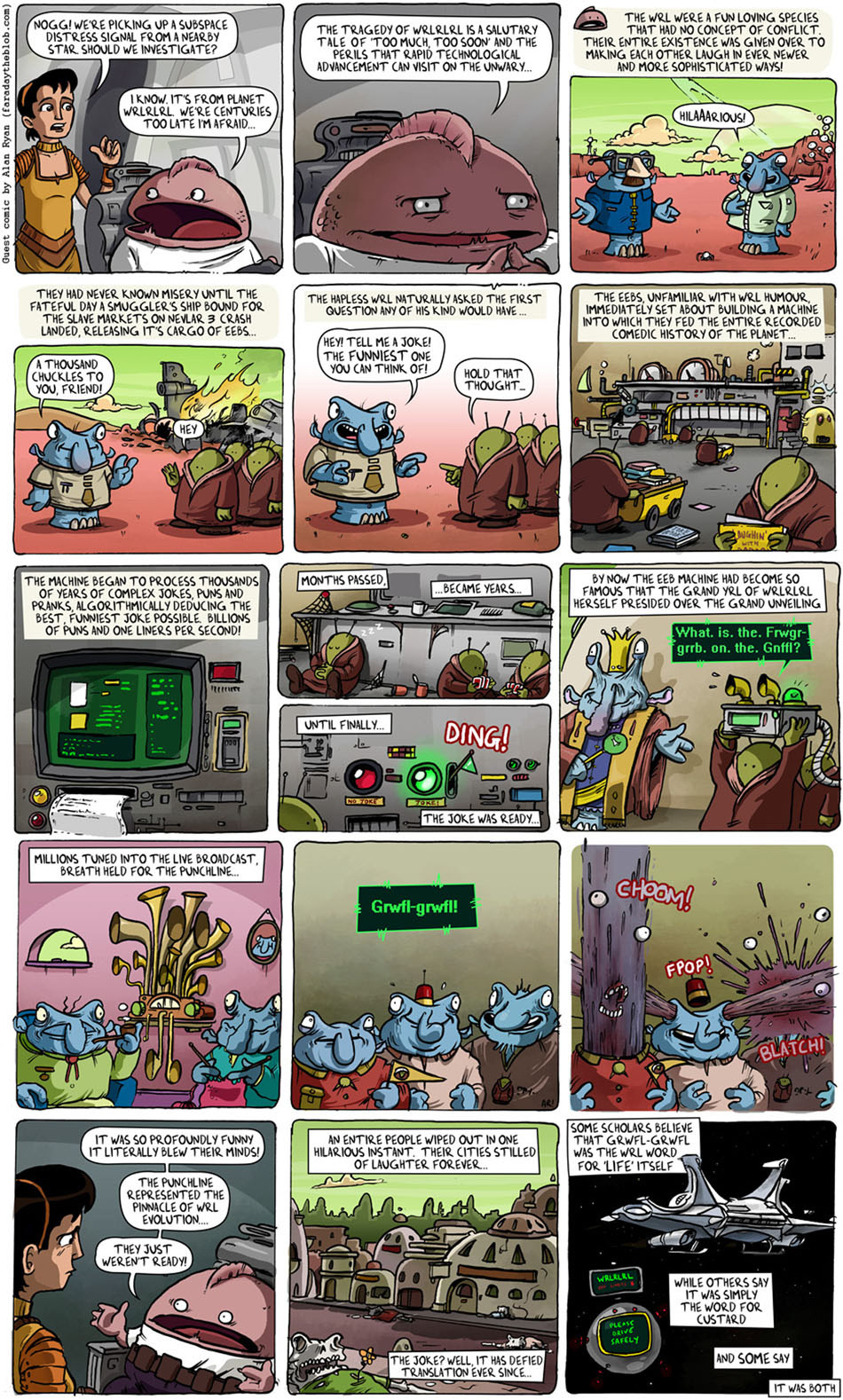 Today’s Spacetrawler was written and drawn by the amazingly talented and funny Alan Ryan of Faraday the Blob. I love this strip and feel you all should too. It has a twisted quirky dark humor… creating almost a discomfort I suppose — a car wreck your insane uncle who is driving is telling you is okay to laugh at.

The first strip I read of Alan’s, or perhaps the first which caught my eye was his HP Lovecraft “Printer of Darkness” strip, which totally got me hooked. 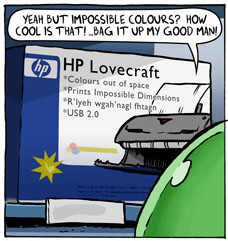 And there is so much else. So definitely, check out his site and trawl the archives. Who would want to miss the Zombie Aporkalypse, or an explanation nobody will ever believe, or how redecorating decisions are made in Life’s a Picnic, of being that Alan is Irish he aptly deals with any rainbow myths you may hold with Rainbow’s End, or have fun with Mr Elf’s Bad Day, or learn what cats are really saying in Cat’s Outta The Bag.

Why a guest strip? There were logistical reasons. As you all know, two weeks ago I had surgery and then just under a week ago I flew to Arizona for a SciFi Con. So I was kinda laid up, drugged, and in pain while trying to get ahead on Spacetrawler before the trip (as it requires printers, scanner, light table, etc, I couldn’t take it with me). As the clock ticked down I began panicking, and asked Alan if he could save my hide. That was the logistical.

But, really, I LOVE Ryan’s humor and cartooning sensibilities, and I might have even been dragging my feet a bit and asked him prematurely simply because I REALLY REALLY wanted to see what he’d do with my characters. I can tell you, i am NOT disappointed.

Oh, and here’s a picture of Faraday and I. 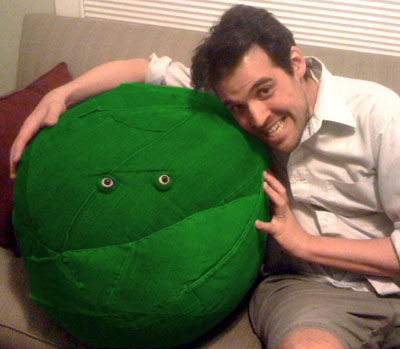 (actually, it’s a sculpture my friend Mary Lucking and her friends are responsible for, and which was blue, but who’s counting?)

Anyhow. I am back home, pretty much fully recovered, and Monday’s strip is lettered and penciled, so there will be no more delays. And I am FULLY AWARE I left you in mid-explanations of the big Eeb reveal, forgive me.

Also, some quick announcements. I will NOT be able to attend BuboniCon in Albuquerque at the end of August. But I am looking at another there in early August. I have added another convention to my list (in right-hand column you can see my appearances), I will be attending the Austin Wizard Comic Con November 11-13. And lastly, thanks for Marcy for the blog mention (she thinks I’m adorable, nobody correct her and tell her differently)! It was great meeting you at LepreCon, Marcy! 🙂

Oh, and I want to read some good romance stories, or stories where romance plays a major part. Recommendations?