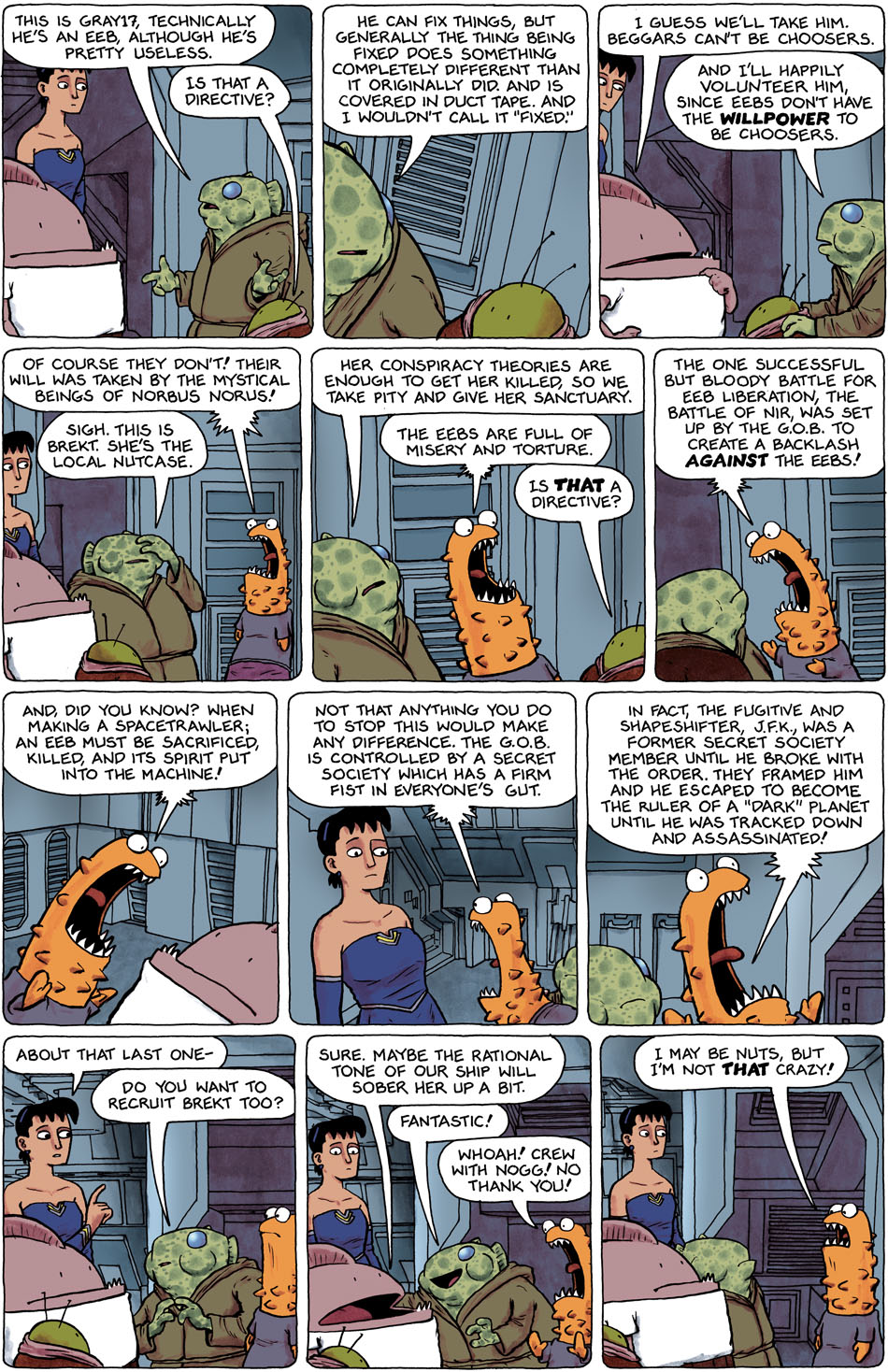 In February, I took a trip to Houston to visit my good friend, Trail. While there, he and I went to see a conspiracy theory movie regarding 9-11. About that movie: I don’t know what to believe, although I admit I’m uncomfortable with the number of unanswered questions.

But, the main reason we went was to watch people who are entrenched in conspiracies as a lifestyle. This strip is inspired by that evening.

Oh, and I realized after drawing Brekt, that she no doubt (subconsciously) was inspired by the finger puppets my dentist used to give me. 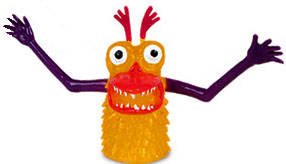 Either that or a french tickler.

In other news. You should visit the Sci-Fi Air Show. Or watch an At-At Day Afternoon. And if you haven’t heard, there is now a bionic cat in the world (unfortunately, he can’t run 60 mph and doesn’t have infrared capabilities). And…. I have another book review!

This past week I listened to the audiobook Bellwether

by Connie Willis. And I have to say that i found it quite good.

I thought the book was solid all the way through. I’ve read “To Say Nothing of the Dog” and “Doomsday Book,” and I would highly recommend those as well, but at times they were a bit dry and confusing. In this one, it kept my attention and focus, it was scattered in an intriguing way I did not find confusing, the characters were interesting and funny and likable, the topic (fads and chaos theory) were enjoyable and interesting, and it felt just the right length.

The basic story is that of a quiet scientist as she tries to find the fad origin for hair bobs. An incompetent assistant, the intervention of an increasingly bureaucratic management, a sheep/ostrich rancher, and a professor studying chaos theory all contribute to her world becoming a lot less quiet. The story is told with humor and social commentary, and is told through the protagonist’s eyes, who filters most things in terms of fads: present and bygone.

I also REALLY enjoyed the woman who read it, Kate Reading. I listen to a lot of audiobooks, and think a lot about what a reader contributes. In general I am able to enjoy a book regardless the reader, but some definitely enhance a book, and a few have made listening intolerable. Jim Dale does an excellent job with the Harry Potter books, in fact he won awards for it, but I’ve listened to other books read by him and they were a bit less impressive, and have the theory that a significant part of his strength in reading HP was the fact that he did a good job imitating the voices from the movie (especially Maggie Smith) and we were all already familiar and possibly fond of those voices.

: I highly recommend it. Solid & fun.

And I’ll end on a final related digression: three years ago at the Portland Comic Fest I was part of the epic art battle, during which we were given two words to draw, I believe the words were “Knids” and “slippage.” I forgot what the other guy drew, but it was simple, easily digestible, understandable, and he DEFINITELY won the contest.

Anyhow, slippage, of course, made me think of Connie Willis’s novel “To Say Nothing of the Dog,” inspired by (and featuring characters from) Jerome K Jerome’s “Three Men in a Boat (To Say Nothing of the Dog).” In her book, “slippage” (if I remember correctly) is the time space continuum adjusting itself so that you can’t go back in time and create an incongruity. It often occured when you were going to a very important time (which really shouldn’t be tampered with) and you kinda ended up near it, but not close enough to mess with it. Which is why in my drawing I featured 3 men in a boat, and a sore bottomed knid, the great glass elevator, and to top it off I drew the Oompa Loompas in the chocolate factory. And as you can see, I gave them a song.

slip and slide
you cannot hide
in time, 3 men in a boat
I hate to get your goat
but your hurt ass is extra wide 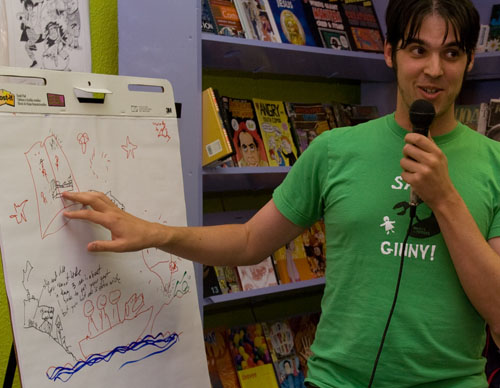 I definitely LOST the contest. But a few people (who I presume knew the book) applauded very loudly. 🙂